The Dutch data archive DANS invited two ‘great thinkers and doers’ (quote by Kevin Ashley on Twitter) in scholarly communications to do some out-of-the-box thinking about the future of scholarly communications – and the role of the digital archive in that picture. The joint efforts of DANS visiting fellows Herbert van de Sompel (Los Alamos) and Andrew Treloar (ANDS) made for a really informative and inspiring workshop on 20 January 2014 at DANS. Report & photographs by Inge Angevaare, KB Research 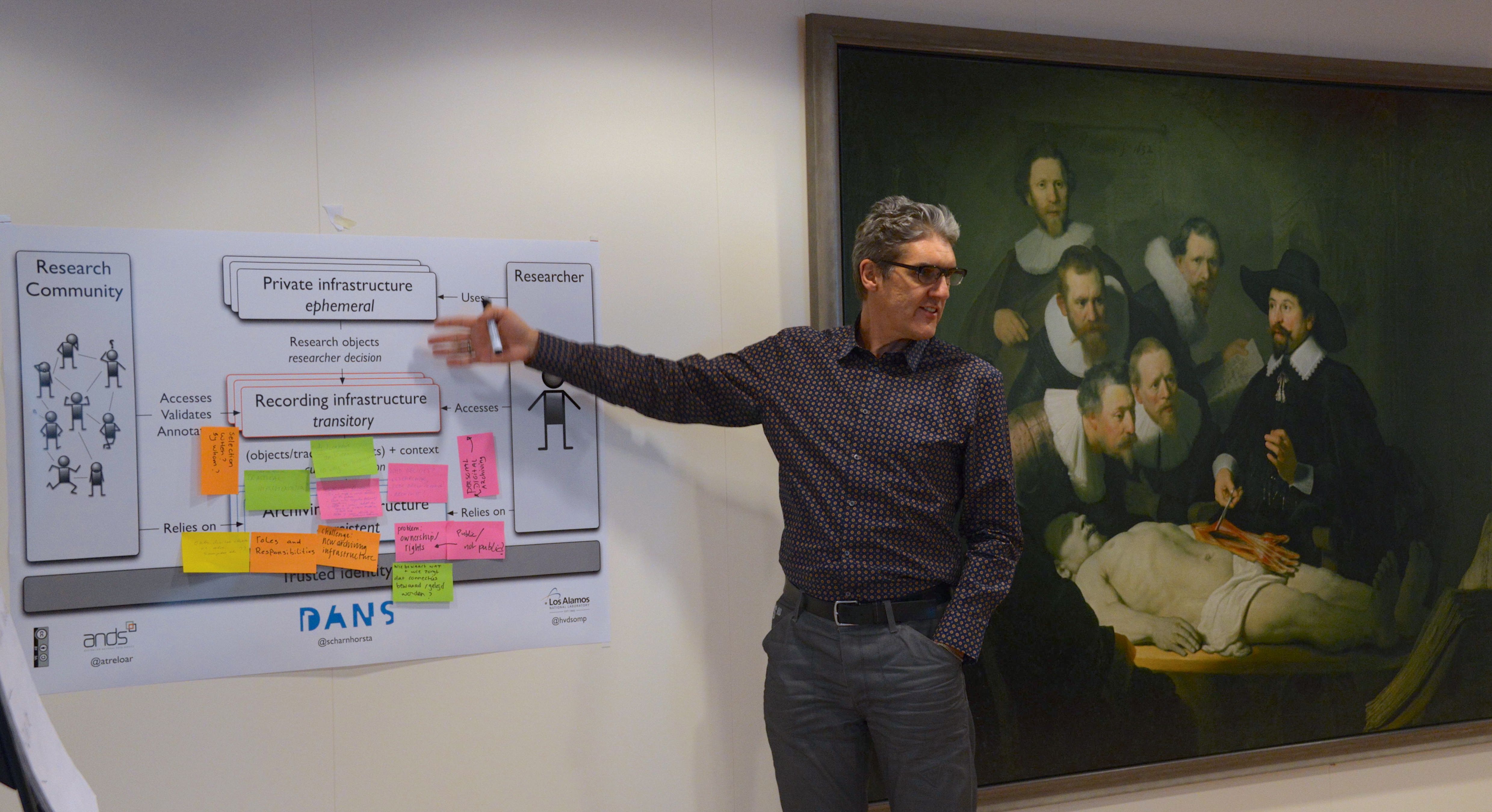 Life used to be so simple. Researchers would do their research and submit their results in the form of articles to scholarly journals. The journals would filter out the good stuff, print it, and distribute it. Libraries around the world would buy the journals and any researcher wishing to build upon the published work could refer to it by simple citation. Years later and thousands of miles away, a simple citation would still bring you to an exact copy of the original work.

Van de Sompel and Treloar [the link brings you to their workshop slides] quoted Roosendaal & Geurts (1998) in summing up the functions this ‘journal system’ effectively performed:

So far so good.

But then we went digital. And we created the world-wide web. And nothing was the same ever again.

Andrew Treloar (at the back) captivating his audience

Van de Sompel and Treloar went online to discover some pointers to what the future might look like – and found that the future is already here, ‘just not evenly distributed’. In other words: one discipline is moving into the digital reality at a faster pace than another, and geographically there are many differences too. But van de Sompel and Treloar found many pointers to what is coming and grouped them in Roosendaal & Geurts’s functional framework: 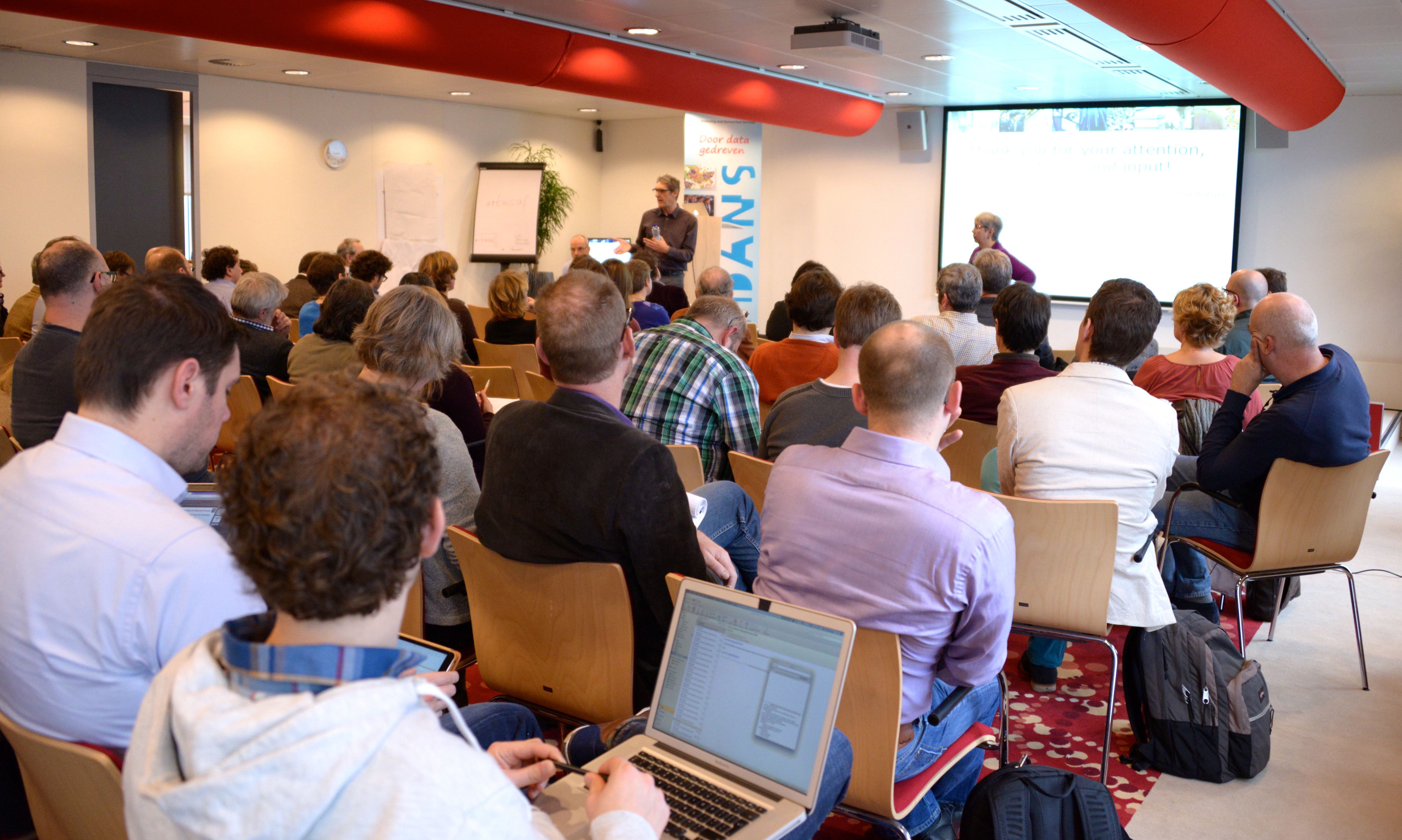 Here’s how van de Sompel and Treloar summarise the fundamental changes going on. (The fact that the arrows point both ways is, to my mind, slightly confusing. The changes are from left to right, not the other way around.) 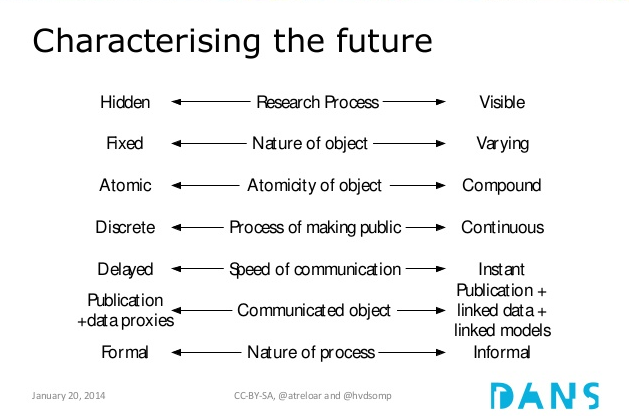 The above slide merits some study, because the implications for libraries and digital archives are huge. In the words of vd Sompel and Treloar: 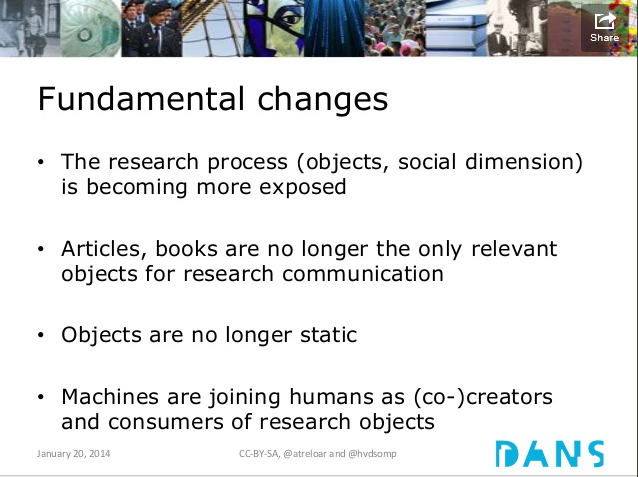 From the ‘journal system’ we are moving towards what van de Sompel and Treloar call a ‘Web of Objects’ which is much more difficult to organise in terms of archiving, especially because the ‘objects’ now include ever-changing software & operating systems, as well as data which are not properly handled and thus prone to disappear (Notice on student cafe door: ‘If you have stolen my laptop, you may keep it if you just let me download my PHD-thesis’). 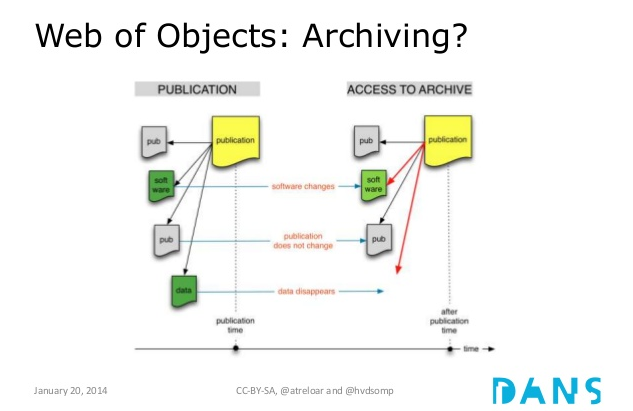 Why archiving is more difficult in the Web of Objects (if print is too small, check out Slideshare original)

It’s like web archiving – ‘but we have to do better’

Van de Sompel and Treloar compared scholarly communications to websites – ever-changing content, lots of different objects (software, text, video, etc.), links that go all over the place. Plus, I may add, a enormous variety of producers on the internet. Van de Sompel and Treloar concluded: ‘We have to do better than present web-archiving methods if we are to preserve the scholarly record in any meaningful way.’ 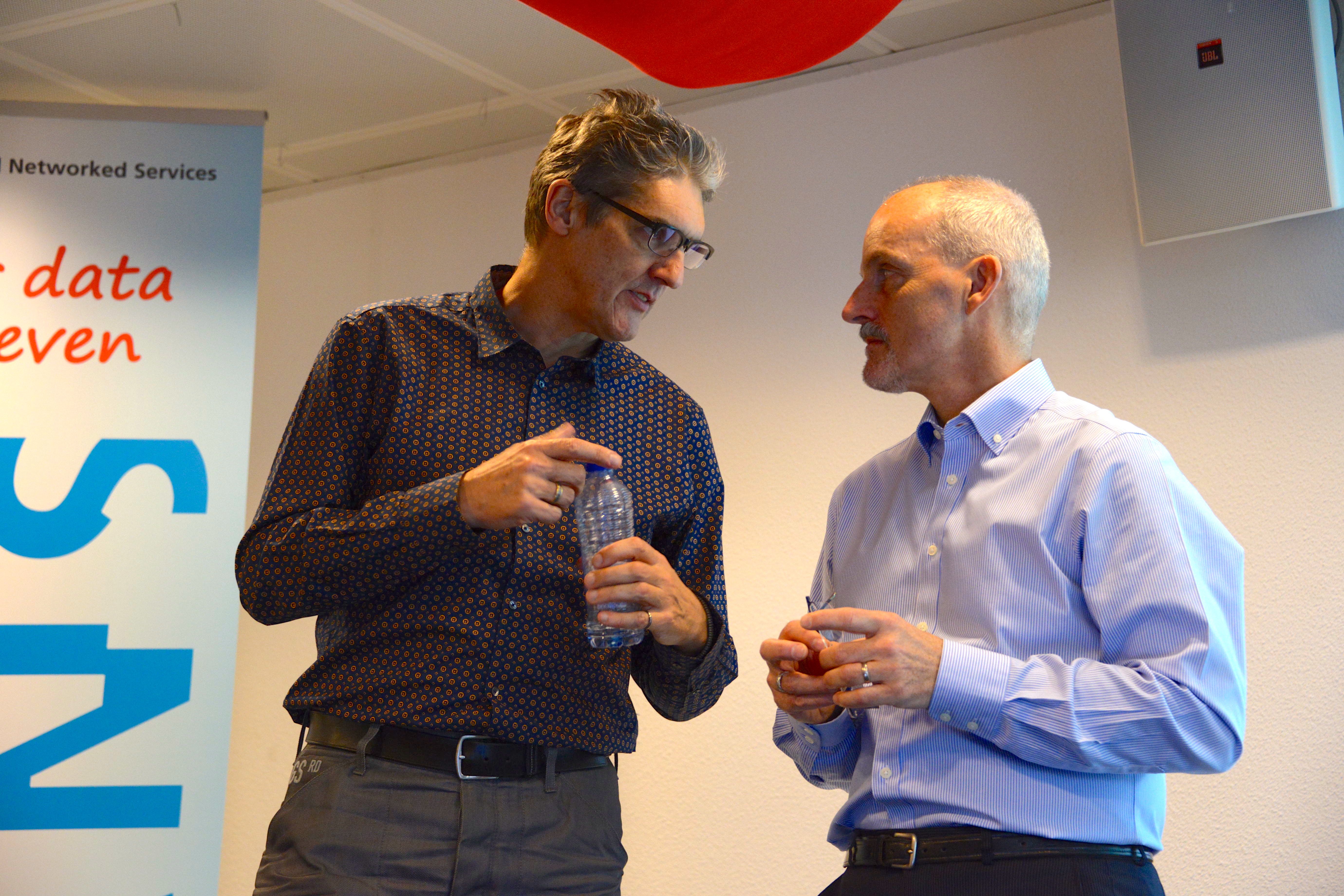 ‘The web platforms that are increasingly used for scholarship (Wikis, GitHub, Twitter, WordPress, etc.) have desirable characteristics, such as versioning, timestamping and social embedding. Still, they record rather than archive: they are short-term, without guarantees, read/write and reflect the scholarly process, whereas archiving concerns longer terms, is trying to provide guarantees, is read-only and results in the scholarly record.’

The slide below sums it all up – and it is with this slide that van de Sompel and Treloar turned the discussion over to their audience of some 70 digital data experts, mostly from the Netherlands: 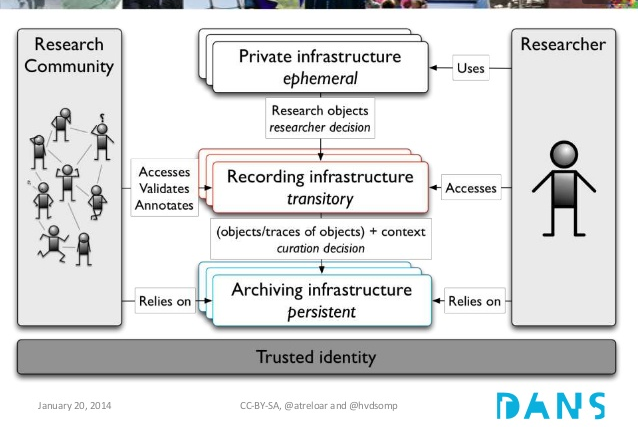 A work in progress: the scholarly communications arena of the future

Group discussions about the digital archive of the future

So, what does all of this mean for digital libraries and digital archives? One afternoon obviously was not enough to analyse the situation in full, but here are some of the comments reported from the (rather informal) break-out sessions: 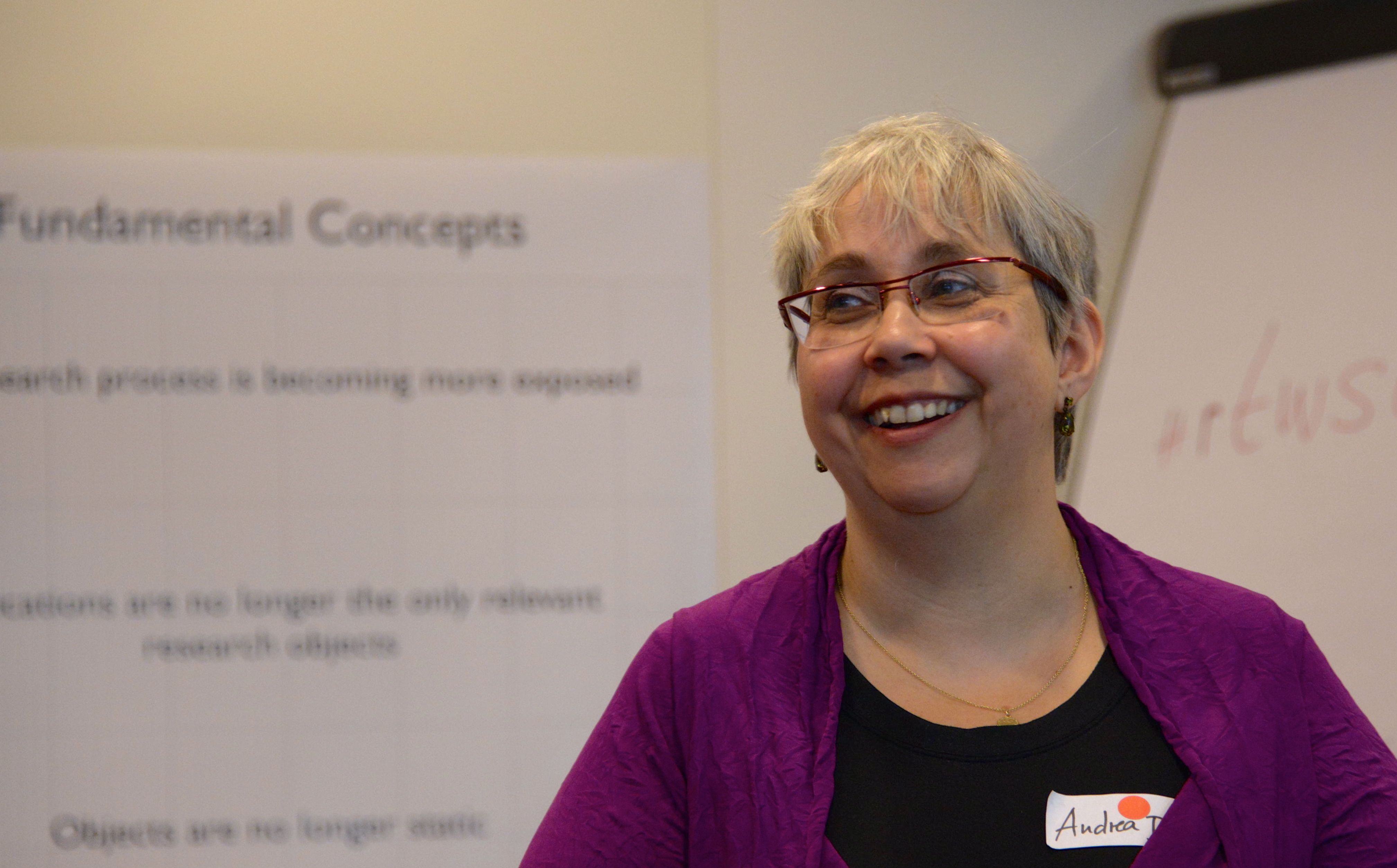 Andrea Scharnhorst (DANS): ‘Perhaps we have to allow for a certain degree of serendipity’ 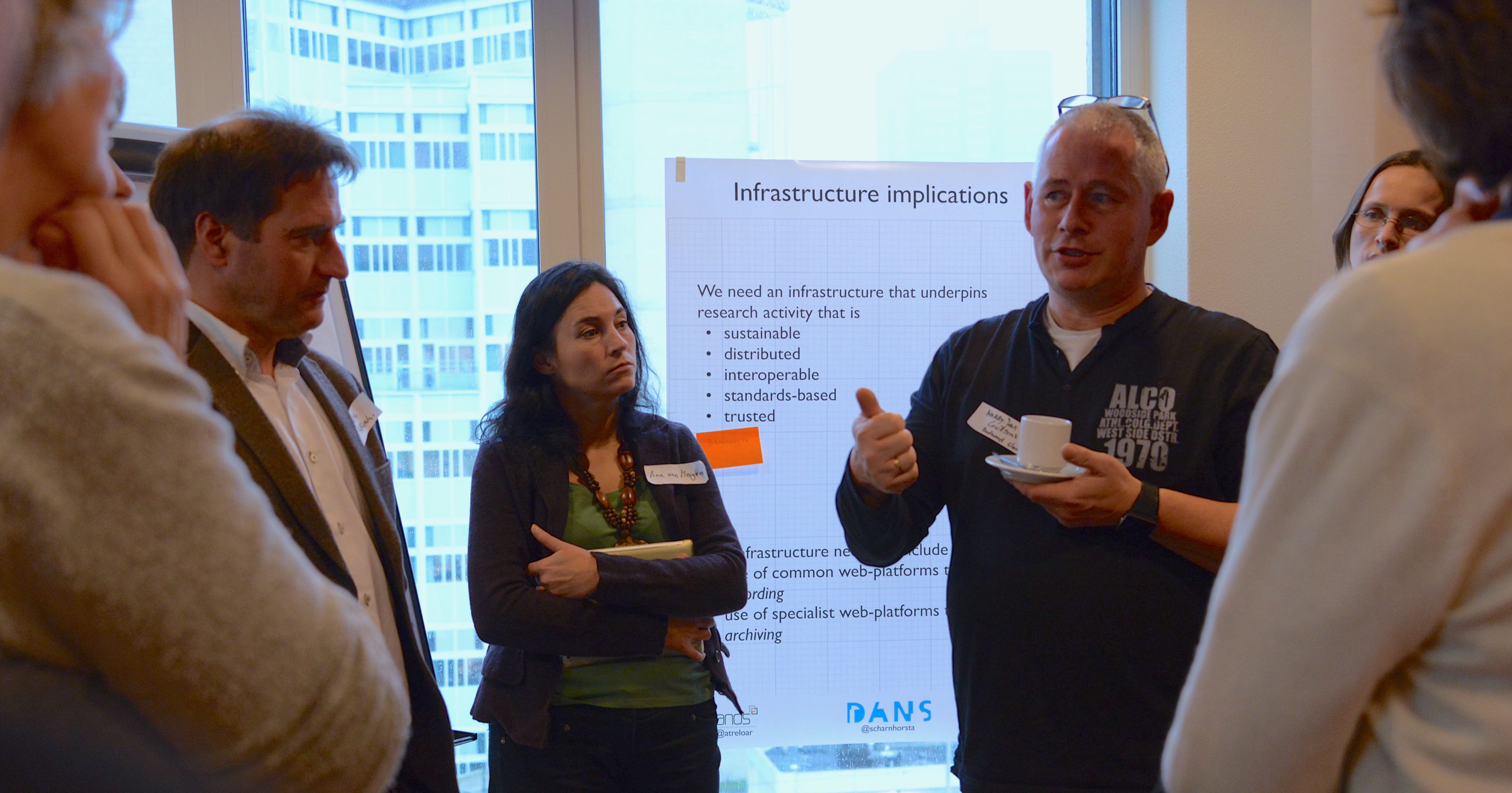 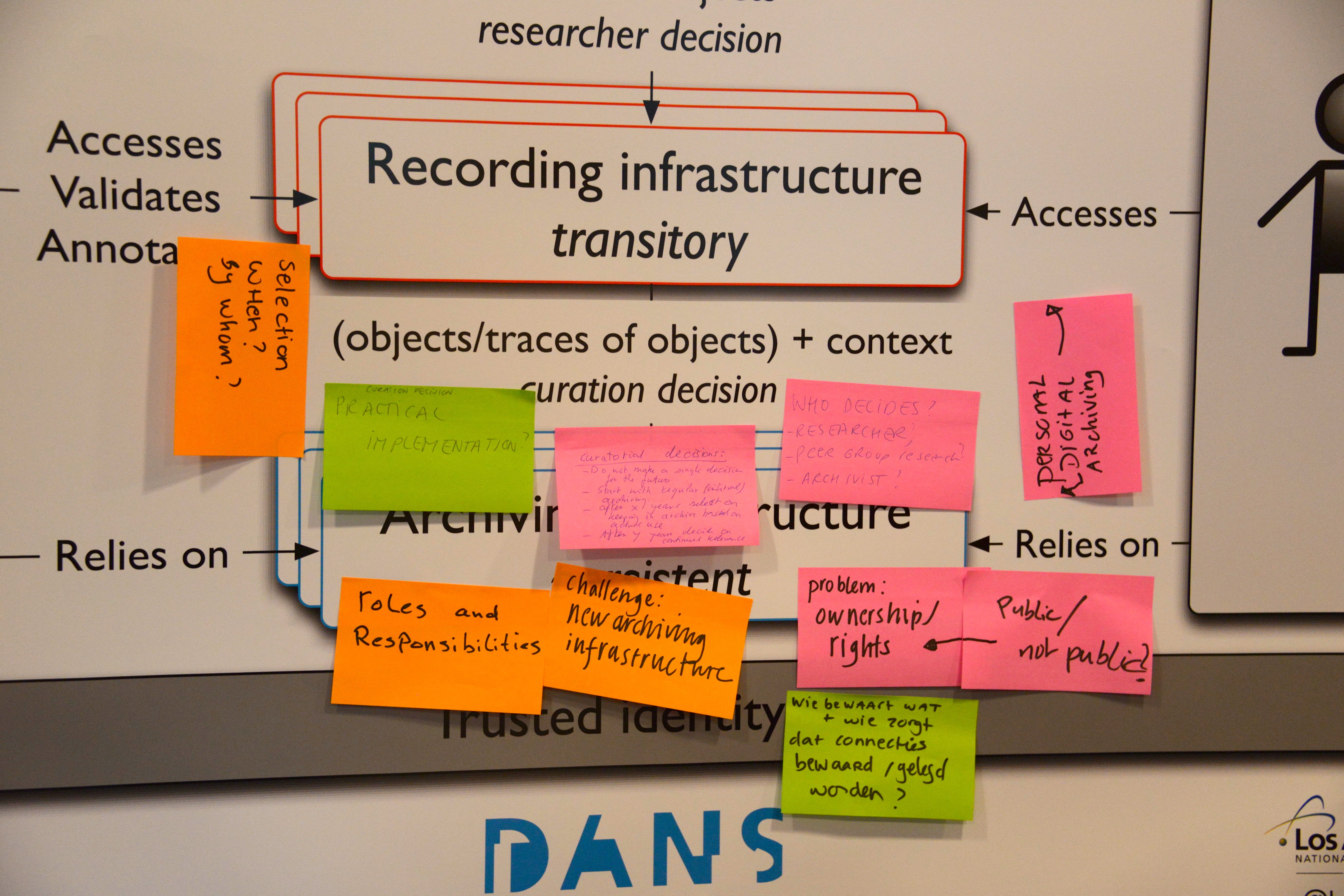 In this breakout session, clearly discussions focussed on the role of the archive. Selection: when and by whom? Roles and responsibilities?

In his concluding remarks Peter Doorn, Director of DANS, admitted that there had been doubts about organising this workshop. Even Herbert van de Sompel and Andrew Treloar asked themselves: ‘Do we know enough?’ Clearly, the answer is: no, we do not know what the future will bring. And that is maybe our biggest challenge: getting our minds to accept that we will never again ‘know enough’ at any time. While yet having to make decisions every day, every year, on where to go next. DANS is to be commended for creating a very open atmosphere and for allowing two great minds to help us identify at least some major trends to inspire our thinking. 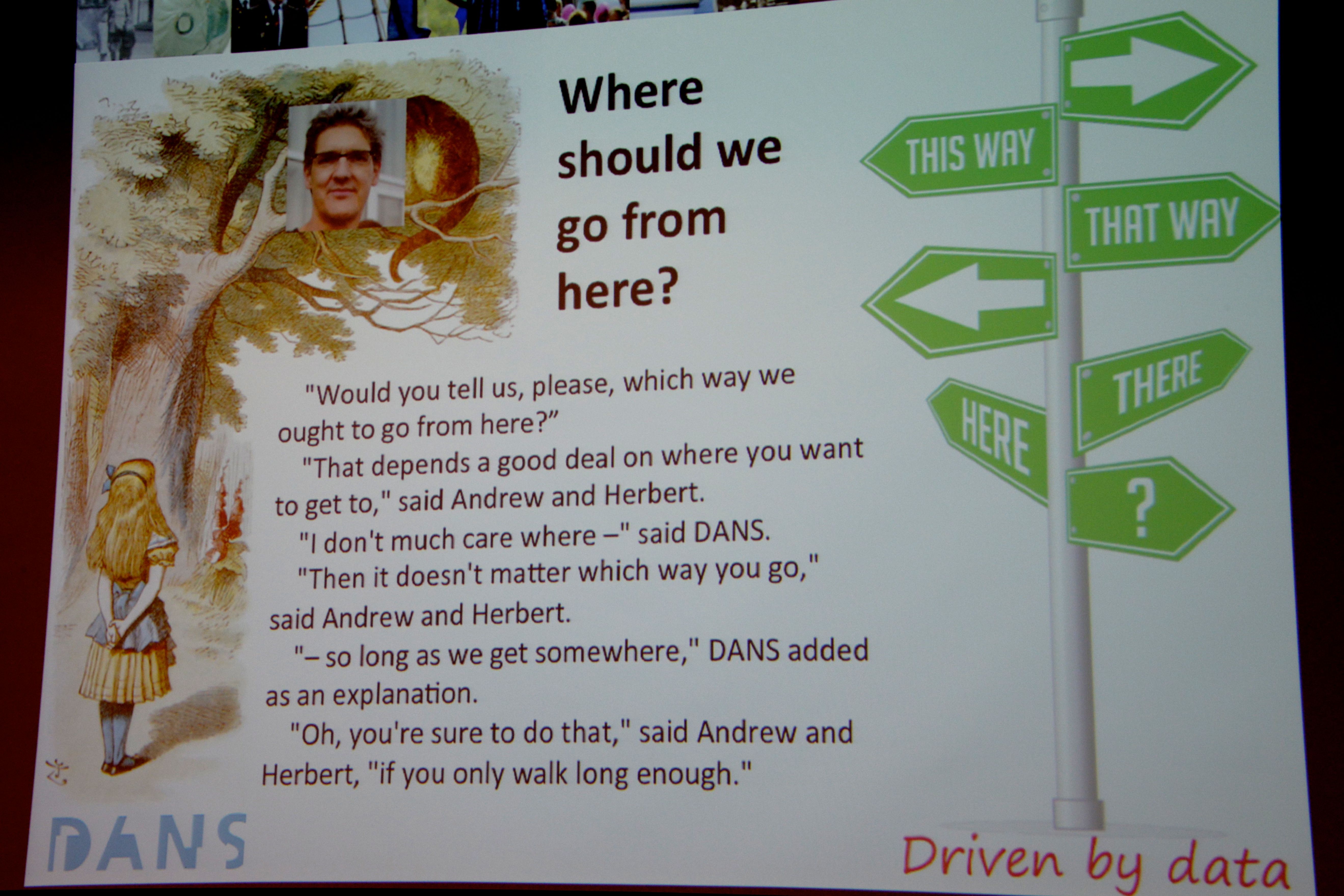 Where do we go from here? Peter Doorn asked his two visiting fellows in Alice-in-Wonderland fashion