This week, the annual DHBenelux conference will take place in Belval, Luxembourg. It will bring together practically all DH scholars from Belgium (BE), the Netherlands (NE) and Luxembourg (LUX). You can read the full program and all abstracts on the website. Two presentations are by members of our DH team (Steven Claeyssens & Martijn Kleppe) and one presentation is by our current researcher in residence (Puck Wildschut – Radboud University Nijmegen). Please find the first paragraphs of their abstracts below:

END_OF_DOCUMENT_TOKEN_TO_BE_REPLACED

Each year the KB invites two academics to come and work with us as researchers in residence: early career researchers who work in the library with our Digital Humanities team and KB Data.  Together we address their research questions in a 6 month project using our digital collection and computational techniques. The output of the project will be incorporated in the KB Research Lab. Today we are happy to announce the output of the PhoCon project (‘Photos in and Out of Context’) by dr. Martijn Kleppe and dr. Desmond Elliott: the KBK-1M Dataset containing 1.6 Million Newspapers Images

END_OF_DOCUMENT_TOKEN_TO_BE_REPLACED

Prof. dr. Frank Huysmans is extraordinary professor of library science at the University of Amsterdam. His chair is funded by the National Library of the Netherlands (KB). On his website warekennis.nl he blogs regularly and recently he discussed three Dutch dissertations on Library Science. We are happy to reblog his Dutch post below.

END_OF_DOCUMENT_TOKEN_TO_BE_REPLACED

This blog is written by dr. Pim Huijnen and research programmer Juliette Lonij. Pim worked as a Researcher-in-residence at the KB in the first half of 2015. The tool that is discussed below is available at https://github.com/jlonij/keyword_generator.

Historical newspapers have traditionally been popular sources to study public mentalities and collective cultures within historical scholarship. At the same time, they have been known as notoriously time-consuming and complex to analyze. The recent digitization of newspapers and the use of computers to gain access to the growing mass of digital corpora of historical news media are altering the historian’s heuristic process in fundamental ways.

END_OF_DOCUMENT_TOKEN_TO_BE_REPLACED

As I am writing this, volunteers are rekeying our 17th century newspapers articles. Optical character recognition of the gothic text type in use at the time has yielded poor results, making this part of our digital collection nearly inaccessible for full-text search. The Meertens institute, who have an excellent track record when it comes to crowdsourcing, has developed the editor (Dutch). Together with them we are working towards a full update of all newspaper issues from 1618 to 1700 that are available in our website Delpher.

Great news and, for some researchers, an eagerly awaited development. A bright future beckons in which our digital text corpus is 100% correct, just waiting to be mined for dynamic phenomena and paradigm shifts.

For all researchers the need to reproduce research results is growing, with new guidelines due to new laws. There is also a specific group of researchers that need sustained access to older versions of digital text. The need is highest for research where the goal is to develop an algorithm and to assess its quality relative to previous versions of the same algorithm or to other algorithms. Without sustained access to older versions, these people cannot do their work.

Is it our role to provide this access? How the National Library of the Netherlands is thinking about this issue, I hope to explain in a later blogpost (soon!). Meanwhile, I would be very interested to hear your experiences. How is this subject discussed in your organization? Does your organization have a policy in place to deal with this?

What if we do, in fact, know best?: A Response to the OCLC Report on DH and Research Libraries ← dh lib

Great answer by Dot Porter to the OCLC report What if we do, in fact, know best?: A Response to the OCLC Report on DH and Research Libraries ← dh lib.

Dot Porter’s response can be reinforced by a quote from DH ‘silverback’ Andrew Prescott from his influential essay An Electric Current of the Imagination: What the Digital Humanities Are and What They Might Become in  http://journalofdigitalhumanities.org/1-2/:

“digital humanities […]  has often developed from libraries and information services and it is frequently seen as a support service. One of the things that I am proudest of in my career is the way in which I have moved between being a curator, an academic, and a librarian. Museums, galleries, libraries, and archives are just as important to cultural health as universities. Indeed, I have found my time as a curator and librarian consistently far more intellectually exciting and challenging than being an academic.”

KB director in This Week in Libraries TWIL #103: The European Library

Watch KB director general Bas Savenije on This Week in Libraries talk on how KB, a national library, will integrate its infrastructure with that of public libraries. Also good stuff on why Europe needs to work together  in The European Library : ‘by working together on developing tools and services you can all share, you free up efforts in your library for other services you can offer your users!’

A drastic cut was made in the budget for the Connecting Europe Facility (CEF) from 9 billion to 1 billion euros. This will hit Europeana, the infrastructure supporting Europe’s free digital library, museum and archive, very hard. Europeana is now being asked to put the case for funding under the revised guidelines for CEF, which were issued 28 May 2013. Europeana will face severe competition for the available funding from other digital service infrastructure such as e-Justice, e-Health and Safer Internet. All good causes in their own right, but the wonderful digital culture infrastructure that has been built in the last decade will soon get squashed if we do not speak out now!  So here goes: 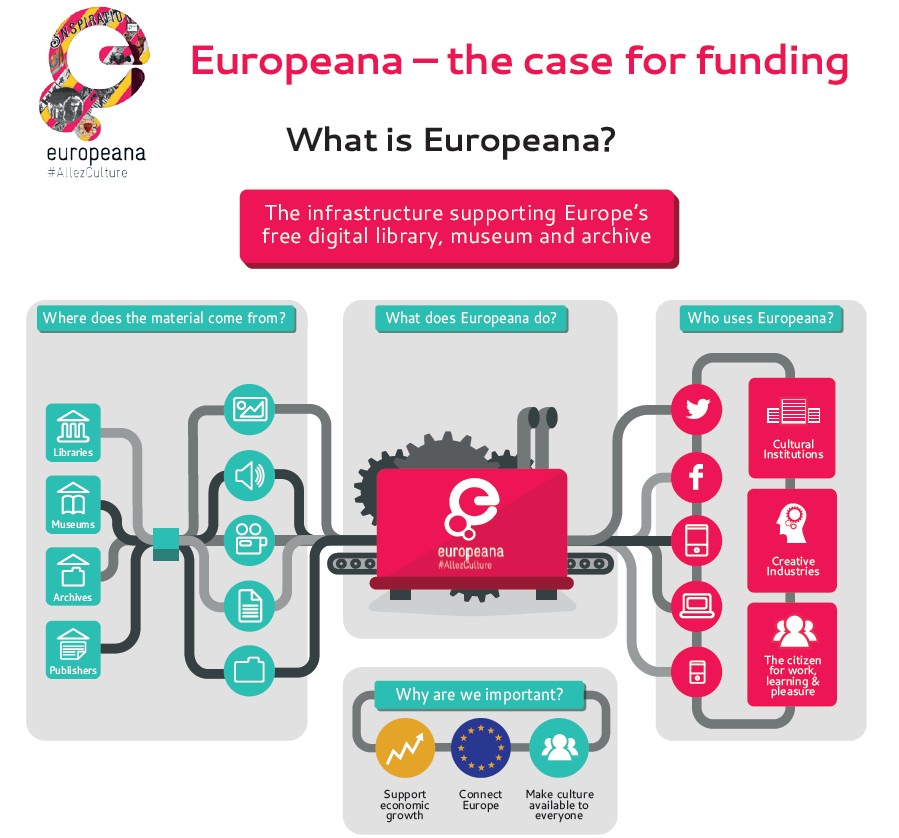 Here is a summary of the three arguments for funding:

‘People often speak about closing the digital divide and opening up culture to new audiences but very few can claim such a big contribution to those efforts as Europeana’s shift to cultural commons.’ Neelie Kroes, Vice President of the Commission

In 2012, all 20m Europeana records were released under a Creative Commons Zero public domain dedication making them available for re-use both commercially and non-commercially. Europeana’s CC0 release is a ‘coup d’état’ that ‘will help to establish a precedent for other galleries, libraries, archives and museums to follow – which will in turn help to bring us that bit closer to a joined up digital commons of cultural content that everyone is free to use and enjoy.’ Jonathan Gray, Open Knowledge Foundation.

For those unaware of Europeana – here is what they do:

Europeana has been transformative in opening up data and access to cultural heritage and now leads the world in accessible digital culture that will fuel
Europe’s digital economy. Through Europeana today, anyone can explore
27 million digitised objects including books, paintings, films and audio.

Europeana is a catalyst for change for cultural heritage

– Because they have standardised the data of over 2,200 organisations, covering all European countries and 29 European languages.

– Because they provide creative industries and business start-ups with rich, interoperable material, complete with copyright information.

– And because they ensure that every citizen, whether young or old, privileged or deprived, can be a digital citizen.

So please support Europeana by tweeting, blogging, facebooking and whatever other media you like, using the hashtag #AllezCulture!

On 25 March 2013 the BL launched their Labs-project. As KB Research is also setting up a Lab we follow whatever happens at the BL in this area with keen interest.

The main objective for BL in the Labs is to engage with users of the digital collections, says Aly Conteh, who heads the digital research and curator team at BL; ‘Humanities researchers are now able to work with new types of resources, using new technologies, and the BL wants to understand what is required from us’. The scholarly  landscape is in transformation and will continue to change. Libraries must change with this, not only in their services but also in the capabilities of their staff. As all curators in the BL are to be digital curators, a training program has been set up to take curators through a new digital scholarship curriculum, from text mining on large datasets to the use of social media. The BL aims to develop new ways of working with scholars– but first they to need to know what it is these scholars want.

The Labs provide the following:

The Labs are kicked off with a competition for projects that explore the BL resources – there’s 3.000 GBP plus a summer residency at BL for the researcher and/or developer with the best project idea. The BL is looking for cross collection search/analysis and the use of novel techniques. ‘The best idea’, says recently appointed Labs Manager Mahendra Mahey, ‘is the one that also helps the BL learn how to support scholars and developers’ .

The launch was a low key affair, mainly testing the water with the digital humanities community. And a very sensible thing to do too – whatever you build without involving this very intelligent and discriminating crowd will not be used. There were thirty to forty people from organisations like the Open Knowledge Foundation; partner institutions like the BBC, and UK digital humanities groups at universities like Kings College, UCL and University of Hertfordshire. We were shown examples of Digital Humanities projects, BL content and tools and techniques for working with datasets.

A few lines of code

All presentations will come online in the next days I expect so I will not bother to repeat them here. I just wish to finish with the Do’s and Don’ts  learned from this launch:

It was an inspiring day in snowy London – cannot wait until we have something to show!