As was posted earlier on this blog, the KB participates in the European project Europeana Newspapers. In this project, we are working together with 17 other institutions (libraries, technical partners and networking partners) to make 18 million European newspapers pages available via Europeana on title level. Next to this, The European Library is working on a specifically built portal to also make the newspapers available as full-text. However, many of the libraries do not have OCR for their newspapers yet, which is why the project is working together with the University of Innsbruck, CCS Content Conversion Specialists GmbH from Hamburg and the KB to enrich these pages with OCR, Optical Layout Recognition (OLR), and Named Entity Recognition (NER). 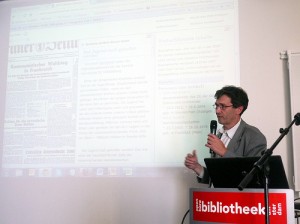 Hans-Jorg Lieder of the Berlin State Library presents the Europeana Newspapers Project at our September 2013 workshop in Amsterdam.

In June, the project had a workshop on refinement, but it was now time to discuss aggregation and presentation. This workshop took place in Amsterdam on 16 September, during The European Library Annual Event. There was a good group of people, not only from the project partners and the associated partners, but also from outside the consortium. After the project, TEL hopes to be able to also offer these institutions a chance to send in their newspapers for Europeana, so we were very happy to have them join us.

The workshop kicked off with an introduction from Marieke Willems of LIBER and Hans-Joerg Lieder of the Berlin State Library.. They were followed by Markus Muhr from TEL, who introduced the aggregation plan and the schedule for the project partners. With so many partners, it can be quite difficult to find a schedule that works well, to ensure everyone has their material sent in on time. After the aggregation, TEL will then have to do some work on the metadata to convert it to the Europeana Data Model. Markus was followed by a presentation from Channa Veldhuijsen from the KB, who unfortunately, could not be there in person. However, her elaborate presentation on usability testing provided some good insights on how to get your website to be the best it can be and how to find out what your users really think when they are browsing your site.

Principles of Usability Testing For Historic Newspapers from Europeana Newspapers

It was then time for Alastair Dunning from TEL to showcase the portal that they have been preparing for Europeana Newspapers. Unfortunately, the wifi connection was not up to so many visitors and only some people could follow his presentation along on their own devices. However, there were some valuable feedback points which TEL will use to improve the portal. Unfortunately, the portal is not yet available from outside, so people who missed the presentation need to wait a bit longer to be able to see and browse the European newspapers. The day ended with a lovely presentation by Dean Birkett of Europeana, who, partly with Channa’s notes, went to all the previously presented websites and offered comments on how to improve them. The videos he used in his talk are available on Youtube. His key points were:

All in all, it was a very useful afternoon in which I learned a lot about what users want from a website. If you want to see more, all presentations can be found at the Slideshare account of Europeana Newspapers or join us at one of the following events:

KB director in This Week in Libraries TWIL #103: The European Library