Juliette Lonij will present a paper together with our former researcher-in-residence Pim Huijnen on his KB project ‘From keyword search to discourse mining – the meaning of scientific management in Dutch vocabulary, 1900-1940’ during the session ‘Extracting textual content 6’, Friday 15 July 2.30-4pm in room MSWB. During the poster session on Wednesday afternoon, Martijn Kleppe will present our new KBK-1M dataset at booth 066: ‘1 Million Dutch Newspaper Images available for researchers: the KBK-1M dataset’. We published both short abstracts below. Martijn is also one of the co-organizers of the AVinDH workshop and will chair a session on ‘Images and Art’ Friday 15 July 11.30 am-1pm in room MADB.

We look forward to the conference and are also eager to get in touch with researchers who are interested in the call for our (fully paid!) Researcher-in-Residence program 2017 which is currently open. If you would like to hear more on our program and possibilities please do not hesitate to approach Steven, Martijn or Juliette if you see them at one of the sessions or breaks. If you want to be sure to meet them you can also send them an email at dh@kb.nl or send a tweet to our @KBNLResearch account.

From Keyword Search To Discourse Mining – The Meaning Of Scientific Management In Dutch Vocabulary, 1900-1940

In this paper we present a technique to enable the historical study of ideas instead of words. It aimed at assisting humanities scholars in overcoming the limitations of traditional keyword searching by making use of context-specific dictionaries. The aim of the project in the context of which this technique was developed, was twofold: first, to create a method for dictionary extraction from a representative text corpus, based on existing methods and algorithms. Second, to find a way of executing dictionary searches in the KB’s digitized newspaper archive and visualizing the results. Both components of the project were tested and evaluated by means of a case study on the impact of American scientific management theories in the Dutch public sphere during the first half of the 20th Century. Using the approach described here, we were able to discover and analyze shifts in the way the modernization of Dutch business was discussed.

The visualisation of news through photographs has exploded since the second half of the 20th century (Kester & Kleppe 2015). However, methods that are employed to analyse the (re)use of visual materials are labour-intensive because Humanities researchers tend to analyse their sources manually (Burke 2001). To estimate the increase in the use of pressphotographs in Dutch newspapers, Kester & Kleppe (2015) e.g manually analysed a sample of 385 newspapers and 5.877 press photographs over the period 1870-2013. To find the recurring use of photographs in Dutch history textbooks, Kleppe (2012) followed a same approach by manually analysing over 5.000 photographs in 400 history textbooks, creating the ‘Foto’s in Nederlandse Geschiedenisschoolboeken (FiNGS) (Photos in Dutch History textbooks) dataset (Kleppe 2013b). Even though manually created and annotated datasets such as FiNGS contain rich & well-annotated data, their scope remains limited given its labour-intensive creation and analyses process. Therefor this poster presents the KBK-1M dataset, that was created specifically for (Digital) Humanities researchers. This dataset contains a collection of 1.603.395 captioned images extracted from Dutch digitised newspapers stored in the Dutch National Library (KB) Newspaper archive of the period 1922-1994. On our poster, we will describe how we obtained the images, what types of research questions it could tailor and how researchers can obtain the dataset for their research purposes.

Please see the poster below. 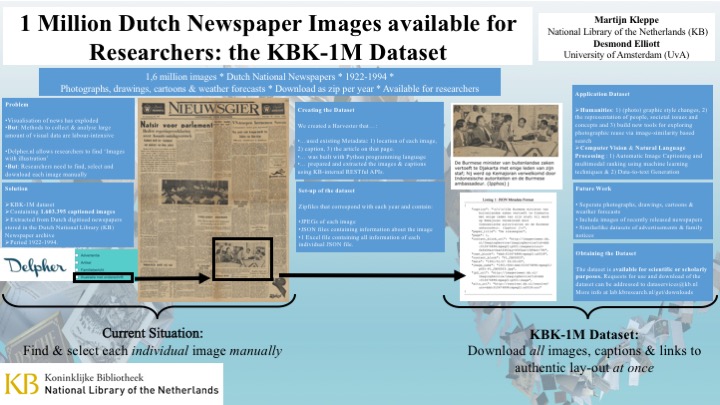 Lets get to work!